We are pleased to announce that our beloved CEO – Dr B R Shetty has been conferred with the Global Indian Achiever Award 2015.

He received the award from H.H. Sheikh Nahyan Bin Mubarak al Nahyan – UAE Minister of Culture, Youth and Community Development, in the presence of H.E. T P Seetharam – Ambassador of India to the UAE, at a ceremony held at The Oberoi Hotel, Dubai on Sunday, January 25, 2015.

The ceremony was organised by the Indian Business and Professional Council, Dubai, which is an apex body representing the Indian businesses and professionals in Dubai and bringing them together on a single platform. Formed in 2003, IBPC Dubai also plays a vital role in strengthening ties and economic cooperation between India and the UAE.

The Global Indian Achiever Awards honour leaders and visionaries who have distinguished themselves across industries and awards individuals who have demonstrated innovation and outstanding business conduct.

Dr Shetty was awarded for his significant contributions to varied industries as an entrepreneur and being a mascot for the strong India-UAE relationship. He is a truly deserving recipient of this award and has reached the summits of success through hard work and perseverance. 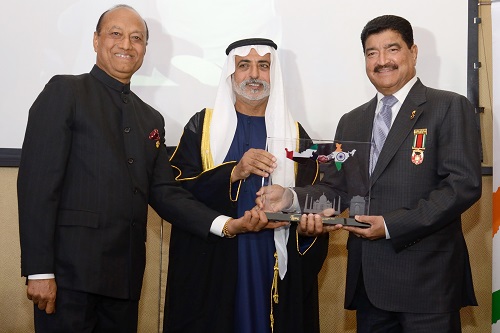