We are pleased to announce that our respected Founder & CEO – Dr. B R Shetty has been conferred with the ‘Indian Club – Bahrain Centenary Award’ at the recently held celebratory event on Thursday, February 05, 2015 at the Indian Club premises in Bahrain.

‘This Indian Club – Bahrain Centenary Award’ was given to Dr Shetty for his valuable contributions in serving the society and acting as a mascot for the Indian community and strengthening the relationship between India and Bahrain.

He was conferred this award by the Indian Club – Bahrain, a prestigious organization in Bahrain which completed 100 years in 2015. The Club provides a platform for the Indian community to come together and help preserve India’s rich cultural heritage. 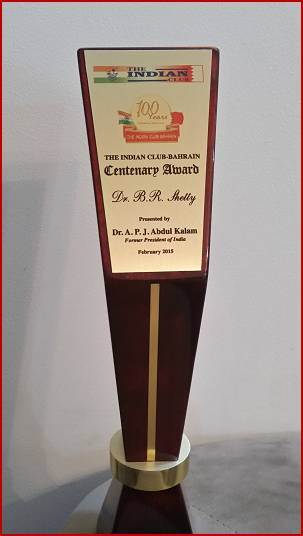