Posted on: 19 December, 2018
Dr. B. R. Shetty has been conferred with ‘Doctor of Humane Letters’ from Sri Sharada Institute of Indian Management – Research Foundation (Sri SIIM Foundation), New Delhi, India.
The honourary doctorate was conferred upon him in recognition of his outstanding contribution to transforming millions of lives through healthcare systems as well as inspirational leadership in the world of healthcare and philanthropy.
Dr. Shetty received the doctorate at the 5th Convocation “Dikshant Samaroh”, hosted by Sri SIIM Foundation on November 30, 2018 at Vasant Kunj, New Delhi. Dr. R. Seetharaman, CEO of Doha Bank was the Guest of Honour at this function. 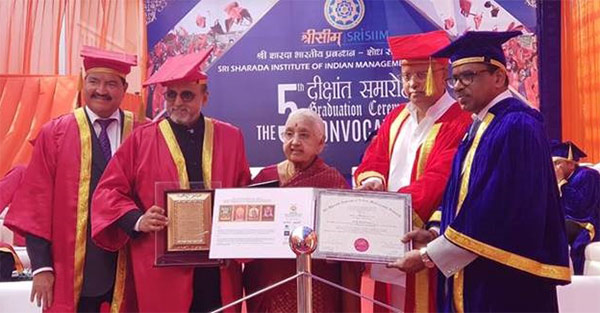