Bavaguthu Raghuram Shetty (popularly known as Dr. B.R. Shetty) is an Indian pharmacist, entrepreneur and philanthropist, who for over 46 years has committed his career to building healthcare facilities and improving the quality of life for people in the UAE and across the world. His companies span the Healthcare, Pharmaceutical, Financial Services, Education, Hospitality, Agribusiness & Environmental Sectors. 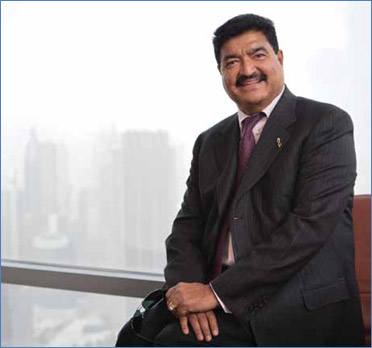 Arriving in Abu Dhabi in 1973 from Kapu, Karnataka with just a few dirhams to his name, Dr. Shetty became a pioneer in the UAE's private healthcare sector. In 1975 he founded a small pharmaceutical clinic, New Medical Centre (NMC), motivated by the vision of the UAE's founding father, Sheikh Zayed bin Sultan Al Nahyan (peace be upon his soul), to provide quality healthcare at affordable rates for the people of Abu Dhabi.

In the decades that followed, Dr. Shetty never lost sight of these fundamental principles. From its humble beginnings, today NMC is the largest healthcare provider in the region with over 200 facilities across 19 countries, and over 20,000 employees treating 8.5 million patients a year. In 2012, NMC became the first healthcare company from the Middle East to list on the London Stock Exchange, capping an historic journey for the man from Karnataka who arrived in Abu Dhabi some 46 years earlier with little more than the clothes on his back and a desire to make a difference.

While healthcare remains Dr. Shetty’s first passion, it is by no means his only one. Five years after establishing NMC, he developed UAE Exchange to provide much-needed fund transfer services to the UAE’s growing expatriate population. UAE Exchange grew into a market leader in the UAE and evolved into a diverse organization with a global reach and world class products and services. Other money transfer and foreign exchange services were founded (Xpress Money, Remit2India, Unimoni) or acquired (Travelex, Ditto, Swych) and brought together with UAE Exchange under a UK-registered holding company, Finablr, in 2018. Finablr was listed on the London Stock Exchange in 2019.

Throughout his career, Dr. Shetty has always dreamed big and pursued opportunities where he believes his expertise can improve the lives of customers, wherever they are in the world. BRS Ventures’ portfolio of companies, the conglomerate under which Dr. Shetty’s investments are now held, is in many ways a reflection of Dr. Shetty’s multi-decade commitment to positive change built on the values of trust, integrity and perseverance.

Dr. Shetty’s role in bringing affordable private healthcare to the UAE was recognized in 2005 when he was awarded the "Order of Abu Dhabi", the highest civilian distinction in the Emirate. Four years later, he was awarded one of India’s highest civilian honours, the prestigious Pravasi & Padma Shri, by the President of India for his services to the Indian diaspora. Dr. Shetty holds these achievements close to his heart because they were awarded by the two countries he believes he was born to serve.